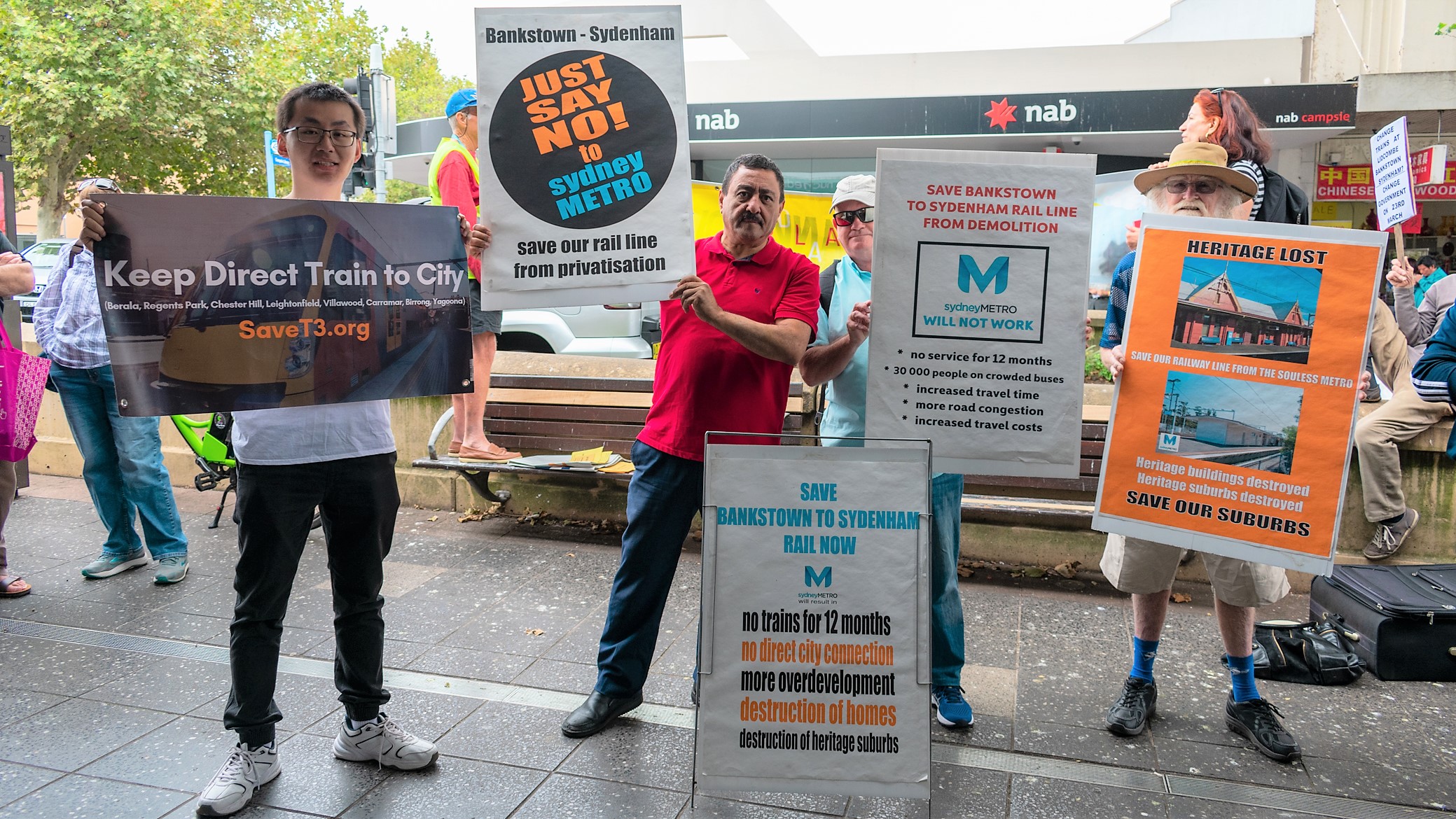 Forcing 19,000 commuters to catch three separate trains to reach the City Circle doesn’t seem to concern the NSW Government despite warnings that the Sydenham to Bankstown Metro will reduce reliability on Sydney’s train network.

Community anger is growing at the government’s broken promise for public consultation in the Bankstown Line shutdown’s Temporary Transport Plans which are yet to be released, even though Sydney Metro announced in 2017 that draft plans would be published “several years beforehand”.

Doubts are also being raised over the 2024 opening of Sydney Metro City and Southwest, with Treasury unable to announce the specific cost of the southwest section from Sydenham to Bankstown.

As the NSW Budget is increasingly stretched by the government’s rush to build toll roads, the funding option for Sydney Metro may come from privatisation of the railway based on the Hong Kong MTR’s business model of high-rise development above and around Metro stations.

The Sydenham to Bankstown Metro is the prime example of the government sacrificing the community’s public transport needs for the interests of property developers.

“Not Welcome” in Sydney

Using cleverly worded brochures and fancy video animations, the government has been busy covering up the fact that Sydenham to Bankstown is barely half of the entire T3 Bankstown Line.

In fact, the current Bankstown Line begins in the City Circle followed by Redfern, Erskineville and St Peters before travelling to Sydenham then eventually to Bankstown, with train services continuing either to Lidcombe or Liverpool.

By referring to the Metro Southwest project as the “Bankstown Line upgrade”, Transport Minister Andrew Constance is leading the charge in ignoring the impact on stations east of Sydenham and west of Bankstown that will not be receiving Metro services.

Every Bankstown Line commuter will lose direct access to the City Circle, but the hardest hit will be the 19,000 commuters from the nine stations west of Bankstown, now being forced to interchange twice.

Stations such as Chester Hill, Villawood and Sefton having already lost the Inner West Line: City to Liverpool (and Bankstown) via Regents Park train service in 2013, will now have to change at Bankstown and again at either Sydenham or Central Station to reach the City Circle.

Shutting down the Bankstown Line will have serious impacts on the Inner West and Canterbury-Bankstown, no matter how the government tries to downplay the increased traffic congestion among a host of other consequences arising from the Metro.

Unlike the Epping to Chatswood rail shutdown with replacement buses having the pleasure of a multi-lane motorway and dedicated lanes around Macquarie Park, the Inner West does not have the capacity to handle the substantial increase traffic from former train commuters now driving, let alone 100 buses an hour arriving at Sydenham.

Transport for NSW documents also reveal that shutting down the Bankstown Line will increase overcrowding at Ashfield, Strathfield and Lidcombe stations on the T2 Inner West Line.

Passenger numbers will more than double at Ashfield from 2,486 to 5,218 in a single hour during the morning peak.

Displaced Bankstown Line commuters will also add 10% to patronage at Strathfield, with Lidcombe bracing for a 22% increase in rail boardings.

The Sydenham to Bankstown Metro isn’t the first cut to the Bankstown Line and unfortunately won’t be the last, with a Sydney Metro newsletter announcing the line’s future termination at Cabramatta.

Previously the Inner West Line was the City to Liverpool (and Bankstown) via Regents Park service, with Bankstown commuters having two options of travelling to the City Circle.

Original rail plans drafted in 2011 show that cuts to both the Inner West Line and Bankstown Line was to allow for conversion of the line for Metro, but only Sydenham to Bankstown has been officially earmarked for the time being.

The extensive impact on Canterbury-Bankstown and Inner West caused by Sydney Metro is completely avoidable because the Sydenham to Bankstown Metro isn’t about improving public transport but designed and financially modelled to benefit developers in their pursuit of high-rise.

There is so much hardship on families, commuters and businesses that can be avoided if the government would respect the wishes of the community and and stop hiding the truth about the Sydenham to Bankstown Metro.

It’s clear from the 91% of community submissions opposing the Metro, that the government has no mandate to hijack an existing railway for developers and to take away 70% of seats on trains as well as remove access to the City Circle from all Bankstown Line stations.

Planning documents show that even stations not getting the Metro such as Lidcombe, Berala, Regents Park, Sefton, Birrong and Yagoona will have replacement buses during the Bankstown Line shutdown.

Commuters will be bused to Sydenham when the Bankstown Line is shut down and then forced onto already crowded T8 South Line and T4 Illawarra Line trains to travel to the City.

Using a misinformation campaign, the government has succeeded into conning many Bankstown Line commuters into believing that Metro is the only way that existing services and infrastructure can be improved.

In fact, the one thing that the NSW Budget does indicate is that accessibility and new lifts at train stations can be funded from the Transport Access Program’s budget which is separate to the Sydney Metro project.

The community is being held hostage by the government’s deception that Metro is the only way the train stations can be upgraded.

It should also be noted that train fleet operation documents obtained under Freedom of Information (GIPA), show that the controversial Sydney Trains timetable introduced in 2017 against internal Transport department advice, actually increased the number of non-airconditioned and older trains on the Bankstown Line.

Could it be that the government deliberately increased non airconditioned and older trains on the Bankstown Line as an attempt to generate public support for the new Metro, especially with the Planning department’s public exhibition for the Sydenham to Bankstown Metro project on display several just months after the timetable change.

Take the Metro down

Overall the Bankstown Line community and Sydney’s train network would be better off without the Sydenham to Bankstown Metro.

Transport for NSW received a letter in 2015 from 4 former rail executives John Brew, Ron Christie, Bob O’Loughlin and Dick Day, warning that there would be “major disruption to the efficient of the network” would occur if the Sydenham to Bankstown was converted into Metro.

The letter also stated that keeping heavy rail on the Bankstown Line was essential to “network flexibility and reliability” as well as being the “relief line” for the Sydney’s West, South West and South.

Although it is too late to reverse the damage done to the Sydney Trains network with Epping to Chatswood already being replaced by Metro and tunnelling from Chatswood to Sydenham well underway, there is still time to divert the Metro away from Bankstown.

In fact, there have been suggestions that deserve consideration to take the Metro down south to Miranda and also to replace the F6 motorway in the St George area.

Transport advocacy group EcoTransit has proposed that the Metro South would start with underground platforms at Sydenham, then tunnels through to the International Airport followed by a number of stations including Brighton-Le-Sands, Sans Souci, Taren Point and Miranda.

By taking the Metro down south, not only can the Bankstown Line be saved but southern Sydney can be saved from another toll road, whilst gaining a genuinely new rail line.

With the Metro affecting many communities across the Inner West to Sydney’s western and southwestern suburbs – there needs to be an independent investigation into why the government is committed to breaking apart Sydney’s rail network seemingly by a misinformation campaign designed to keep the devil in the details.

Sydney Metro has never been about improving public transport but designed by the government to favour property developers, hence the need to act now to save the T3 Bankstown Line!

This article originally published in AltMedia on Wednesday 14 August 2019

Please sign the petition to Save T3 Bankstown Line: www.SaveT3.org