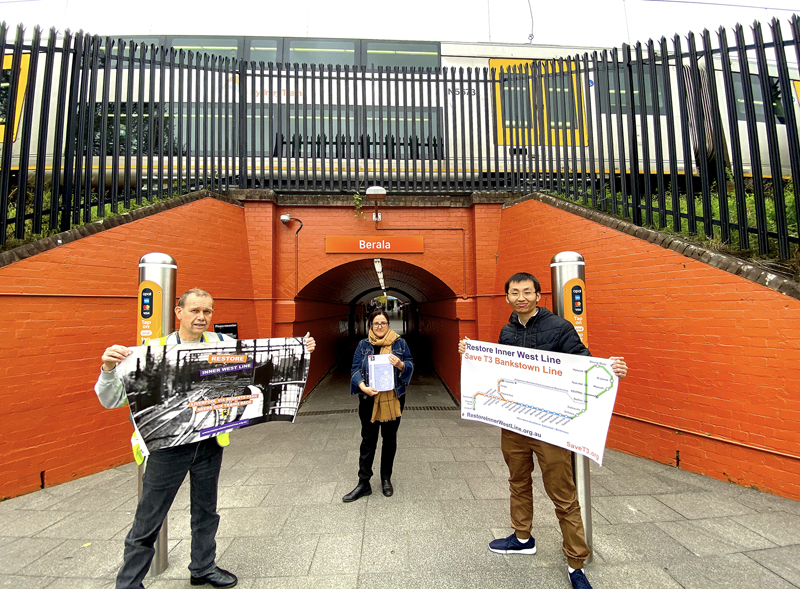 Refusing to give up the campaign to restore the Inner West Line, community campaigners Tony Oldfield, Barbara Coorey, and Roydon Ng have ended the government’s attempts to replace trains with buses

Campaigners calling for the return of more direct train services to the Sydney CBD from stations, including Berala and Regents Park, have claimed a small victory after the release of recommendations from an NSW Upper House inquiry.

The Transport and Customer Service Committee examined the proposed Sydenham-Bankstown conversion for Metro Southwest, and chair Greens MLC Abigail Boyd said the committee “does not believe that the project has won community support”.

“Nor does it believe that the NSW Government has clearly made the case and rationale for Sydney Metro Southwest, including conversion of the Sydenham to Bankstown line,” she said.

“During the course of the inquiry, serious questions were raised as to the adequacy and transparency of the business case supporting the project.”

Among the nine findings in the Committee’s final report, was a call for the release of the project’s full business case, although three dissenting Government members rejected the findings, noting that a summary of the report was already available.

Thanking supporters of the ongoing campaign, Co-convenor of the Restore Inner West Line group, Roydon Ng, said the Inquiry had also forced the NSW Government to abandon plans to replace trains with bus services at stations including Berala and Regents Park.

While optimistic they would succeed eventually, he said but there was still more work to do.

“We feel like we are halfway to restoring the Inner West line,” he said.

“Stations have been saved, but we still need help to restore the Inner West Line,” he said.

“This is a big win for the Cumberland community and commuters west of Bankstown.

“It is clear that cuts to the Sydney Trains Network were designed to facilitate the introduction of Sydney Metro Southwest and ultimately result in increased over-development,” he said.