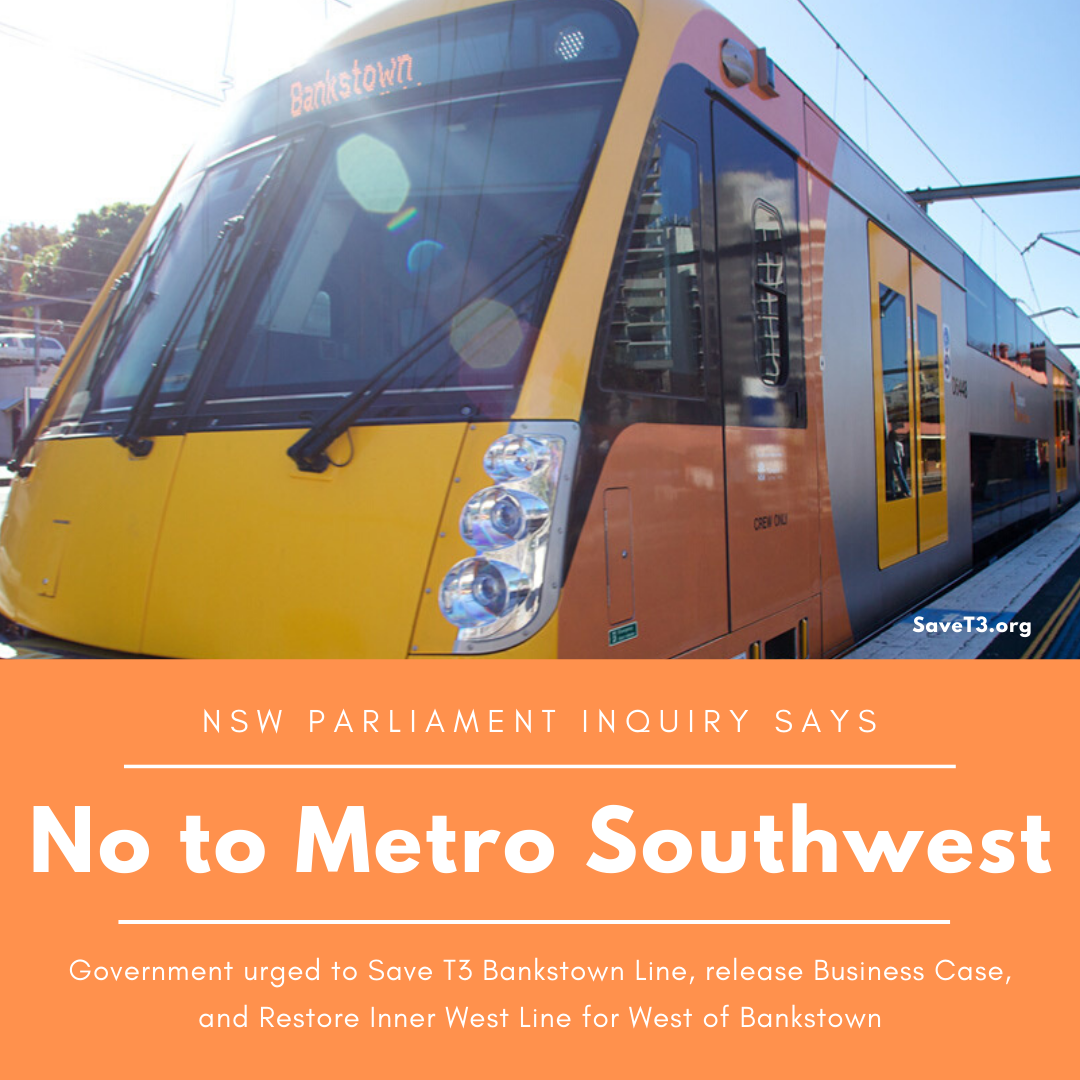 The Restore Inner West Line & Save T3 Bankstown Line community action group thanks the NSW Legislative Council for examining the impact of changes to the Sydney Trains Network for commuters west of Bankstown.

We are encouraged by the NSW Parliament’s recommendation for the restoration of train services on the former Inner West Line’s City to Liverpool via Regents Park route.

The NSW Government must implement the restoration of our train services, as recommended by the NSW Legislative Council’s Transport and Customer Service Committee.

Given the overwhelming evidence presented to the NSW Parliament, the government is without excuse for its unjustified removal of the Inner West Line train service from west of Bankstown in 2013.

It is clear that cuts to the Sydney Trains Network were designed to facilitate the introduction of Sydney Metro Southwest and ultimately result in increased over-development.

Our community action group will continue to fight for direct train services to Sydney City Circle, Inner West, and Liverpool for all existing stations on the T3 Bankstown Line including Birrong and Yagoona.

We urge the Transport for NSW to apply the traditional name of “Inner West Line” to the “Liverpool via Regents Park” service, as the currently proposed label of “Bankstown Line” will confuse commuters given that this train does not travel to Bankstown.

The restoration of the “Inner West Line” (City to Liverpool via Regents Park) train service reduces travel times to Sydney University (Redfern) by 6 minutes for students west of Bankstown.

Once the Inner West Line is restored, commuters no longer need to interchange at Birrong, Lidcombe, Strathfield to reach Inner West stations.

The Inquiry Report’s other key recommendations including terminating the Sydney Metro at Sydenham (no conversion of Sydenham to Bankstown) and the full release of the Business Case are strongly welcomed.

Thank you also to our supporters, volunteers and community partners such as The Battler, Sydenham to Bankstown Alliance, EcoTransit Sydney, Keep Our Area Suburban, Fix NSW for the continued assistance in the campaign to improve our public transport.

We will continue to advocate for improving transport connections and supporting our local communities.