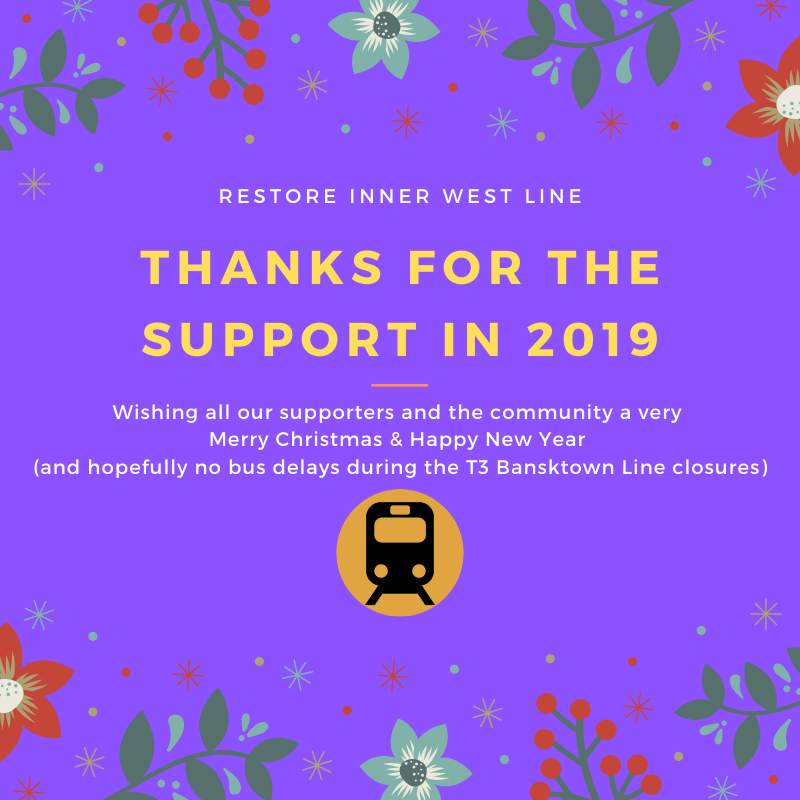 We would like to thank our volunteers, the community and our partners for the immense support we have received. The past year has been a phenomenal success in our campaign to improve public transport. Even though we still do not have a regular Liverpool via Regents Park train service, we are moving closer towards its restoration.

The restoration of the Inner West Line (City to Liverpool/Bankstown loop via Regents Park) is the key objective of all our campaigns. By restoring the Inner West Line, commuters from stations west of Bankstown have a direct train service to City Circle without having to interchange at Birrong and Lidcombe

We also support upgrading signalling on the Sydney Trains Network which would allow for a higher frequency of service compared to Sydney Metro Southwest. Bringing back the Bankstown loop via Regents Park on the Inner West Line allows for better connectivity for the Canterbury-Bankstown area

The Inner West Line’s extension from Homebush to Parramatta remains the strongest evidence of why restoring the regular service to Liverpool via Regents Park can be achieved without impacting the rest of the Sydney Trains Network. The NSW Government has proven that there is adequate track capacity beyond Homebush for the Inner West Line to run efficiently hence there all claims surrounding the necessity of line’s truncation in 2013 is false

Another pitfall of the Inner West Line operating to Parramatta instead of Liverpool via Regents Park is the loss of fast trains at Lidcombe, Auburn, Clyde, Granville and Harris Park. The 2017 timetable not only removed many express services on the T1 Western Line but also for Liverpool commuters forced to endure a slower journey to the City. The Fix Liverpool Transport campaign has focused on bringing back services including direct to Campbelltown, express to City and trains via Regents Park

Our Save T3 Bankstown Line campaign (with the support of The Battler, the Sydenham to Bankstown Alliance, EcoTransit Sydney/Basta! and Keep Our Area Suburban) has been one of our fastest growing groups in 2019

This was not particularly surprising given our Freedom of Information investigation had uncovered that since the new timetable was introduced in 2017 as part of the so-called “More Trains, More Services” program, there has been an increase in travel times for commuters in Western and South West Sydney. It also appeared that stations near soon to be opened infrastructure projects such as WestConnex had train services cut and railway upgrades cancelled

Our Freedom of Information investigation also uncovered a secret NSW Government document admitting that the downgrading of Sydenham to Bankstown into Metro Southwest would substantially increase travel times for 4 South West stations. Cabramatta, Warwick Farm, Casula, Liverpool would experience a 17 minute increase to the City. Another internal Transport for NSW document showed that old and un-airconditioned trains were increased on the T3 Bankstown Line prior to the Planning Exhibition of the Sydenham to Bankstown Metro

The NSW Government was also forced to hand over documents from their Rail Advisory Committee meeting in 2012 which shows a former manager from Hong Kong MTR Corporation was involved in the establishment of the Sydney’s Rail Future strategy including the downgrading of the Bankstown Line into Metro. This committee was chaired by Carolyn McNally who in late 2018 would give Planning Approval for the Sydenham to Bankstown Metro

The re-election of the NSW Government increased the lack of transparency and secrecy surrounding infrastructure projects with Transport for NSW deleting records from its Freedom of Information (GIPA) Disclosure Logs. Previously released forecasts for train patronage in 2019 was removed from public access in fear that it would undermine the basis for the 2012 Sydney’s Rail Future Strategy. The abuse of Freedom of Information (GIPA) would continue later in the year with Sydney Metro charging $1170 to access information regarding the Temporary Transport Plan for the T3 Bankstown Line shutdown

2019 has been a big year of protests and marches against the NSW Government’s attack on public transport. Rallies we participated in included: Fix NSW (Hyde Park, March), Stop T3 Metro (Campsie, March) and Rally for Public Transport (NSW Parliament, December). We also supported local residents to fight back against plans to extend the Metro to Yagoona station to undermine houses and Gazzard Park with a tunnel towards Liverpool

We are thankful of Cumberland Council’s support of Restore Inner West Line & Save T3 Bankstown Line. Council’s 2030 Local Strategic Planning statement was amended to include bringing back the train services for Liverpool via Regents Park and Cumberland Mayor Steve Chrisou has called on the NSW Government to ensure direct trains to City from west of Bankstown would be maintained

In August, we successfully lobbied the NSW Upper House to establish an Inquiry into the Sydenham to Bankstown Conversion for Metro Southwest including a focus on the impact on west of Bankstown. The Inquiry chaired by Greens MLC Abigail Boyd commenced with hearings in November and December, with the final report to be delivered in March 2020

In the lead up to the Inquiry and with the assistance of The Battler, we collected around 700 pro-forma submissions opposing the downgrading of Sydenham to Bankstown into Metro and also called for restoring the Inner West Line as well as express trains for Lidcombe, Auburn, Granville

The Upper House Inquiry heard evidence of how the Sydney Trains Network and timetable had been altered to give the impression that Sydney Metro would be the only means of improving services on the T3 Bankstown Line. Issues surrounding over-development and improper dealings with property developers were also raised at the Inquiry

This year also marked 95 years since the opening of the Lidcombe to Cabramatta Rail Link which began the City to Liverpool via Regents Park train service in 1924. This route was opened as part of efforts to reduce overcrowding on the Western Line especially around Granville. Sydney Trains refused to mark this occasion

Although the plans to replace trains with bus services in the short-term future after Metro Southwest opens have been abandoned, we are remaining vigilant to the NSW Government’s Future Transport Strategy plans provided to the NSW Parliament indicating that Berala, Regents Park and possibly other stations beyond Bankstown being closed

Thank you for the ongoing support. We look forward to continuing in the fight to improve our public transport