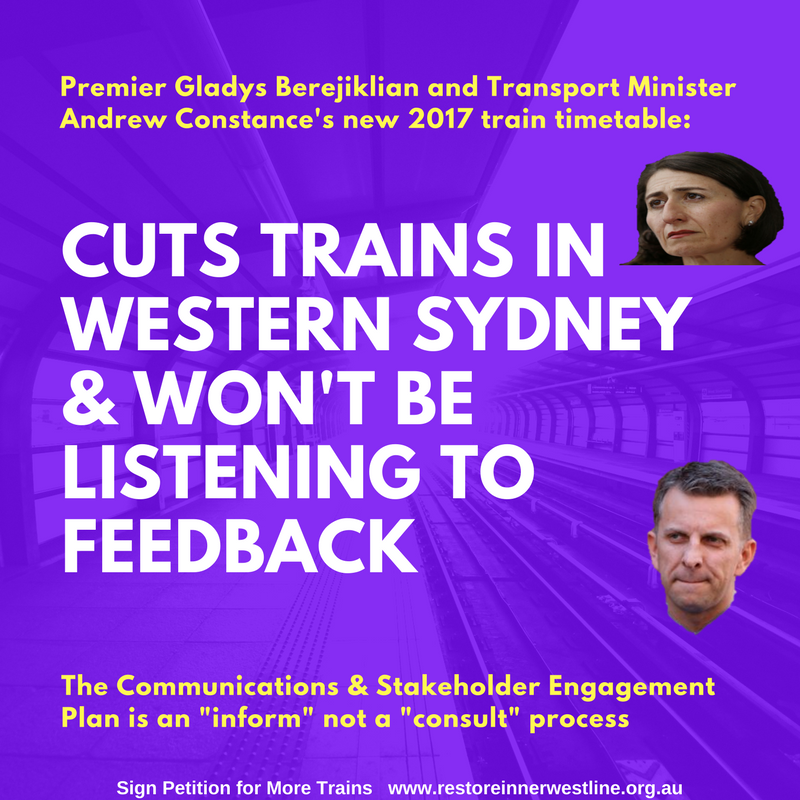 With massive cuts and changes to Sydney Trains’ services starting on 26 November, the Restore Inner West Line community action group can reveal the extent of the State Government’s contempt for commuters.

The new timetable is part of the wider More Trains, More Services project that has already promised to cut fast trains from many Western and South West Sydney communities.

Transport for NSW’s own “More Trains More Services Stakeholder Engagement” documents highlights the importance of being “upfront with stakeholders that the engagement is an ‘inform’ process and not a ‘consult’ or ‘involve’ process“.

The internal Transport for NSW plan also states that “engagement is unlikely to change the outcome” and that a consultation process would actually involve keeping the public informed, listening and acknowledging concerns and providing feedback on public input.

Despite the government’s plans to contact local advocacy groups such as “Two More Trains for Singleton” , the Restore Inner West Line campaign has once again been left out of the stakeholder engagement process despite representing commuters at 16 stations (from Homebush to Regents Park to Liverpool and Bankstown).

A Transport for NSW staffer writes that “Communications and stakeholder engagement are
integral to achieving [the] objective [of] …working collaboratively to develop the new timetable and resolve potential issues and unintended consequences“.

It is evident that a serious lack of sincerity exists in New South Wale’s transport planners with the agency happy to exploit fake community consultation as means of forcing their malicious downgrades to public transport across the state.

Once again local Members of Parliament have been promised information packs about the new train timetable. If Transport for NSW is as thorough in 2017 as it was with the 2013 timetable, local representatives need not stand beside the letterbox waiting for a non-existent package.

With just a fortnight until Lidcombe loses fast trains, Liverpool has slower “express” train to City and many Bankstown Line stations having services gaps of 25 minutes, Transport for NSW has promised that the new timetable will have “no surprises”.

The Restore Inner West Line campaign understands that many commuters in Western and South West Sydney are not aware of the new train timetable starting in late November let alone the extent of the service changes.

Many local Councillors and community action groups from Strathfield, Cumberland, Fairfield, Bankstown and Liverpool have signed a joint letter calling on the Transport Minister Andrew Constance to reinstate the Liverpool to City via Regents Park and Bankstown to City via Regents Park train service along the former Inner West Line route, which was cut at Homebush in 2013.