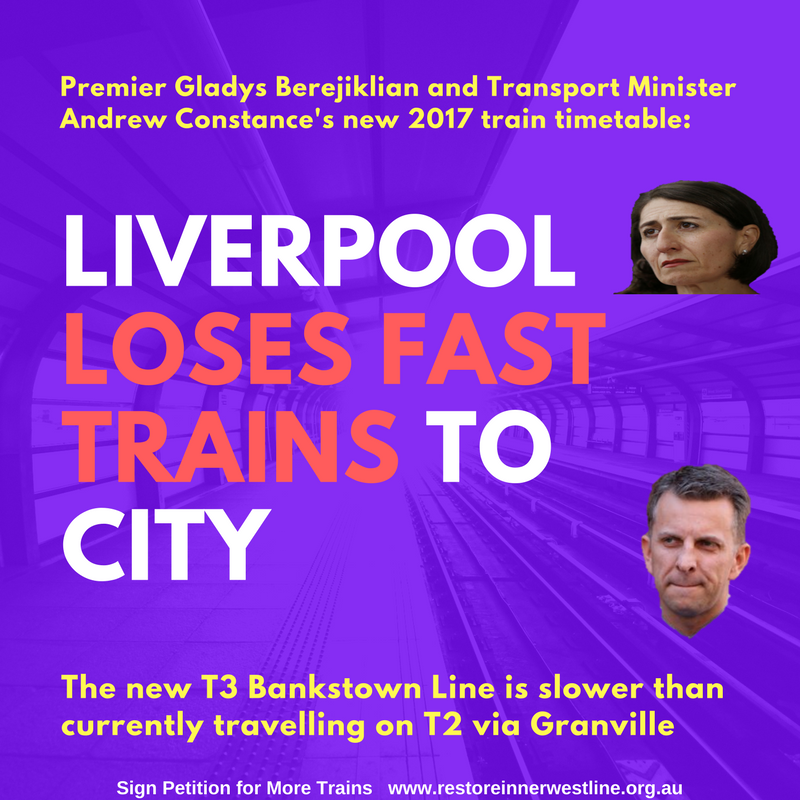 Liverpool loses fast trains to the City in the latest downgrade of the Sydney Trains timetable.

Journeys to the City are slower and less seats are available on the Bankstown Line.

Transport for NSW falsely claims that the new timetable’s Liverpool to City route via Bankstown is faster.

With the 2013 timetable cutting the Inner West Line from Liverpool via Regents Park, forcing commuters to use the T2 Line via Granville to travel to City, overcrowding has increased on both the T2 South Line and T3 Bankstown Line.

The reduction in service levels results in less available seats overall especially during the peak hours.

The so-called fast trains from Liverpool to City via Bankstown will also stop from 2018 onwards due to the construction of Sydney Metro’s Sydenham to Bankstown project.

Case study: Liverpool to Central arriving before 9am Monday

The current timetable shows the best route from Liverpool to Central is on the T2 Line via Granville with journey times between 48 minutes to 53 minutes.

The new timetable advises the best route from Liverpool to Central is on the T3 Line via Bankstown with journey times between 52 minutes to 53 minutes.

Find out how the new 2017 train timetable downgrades your journey here.