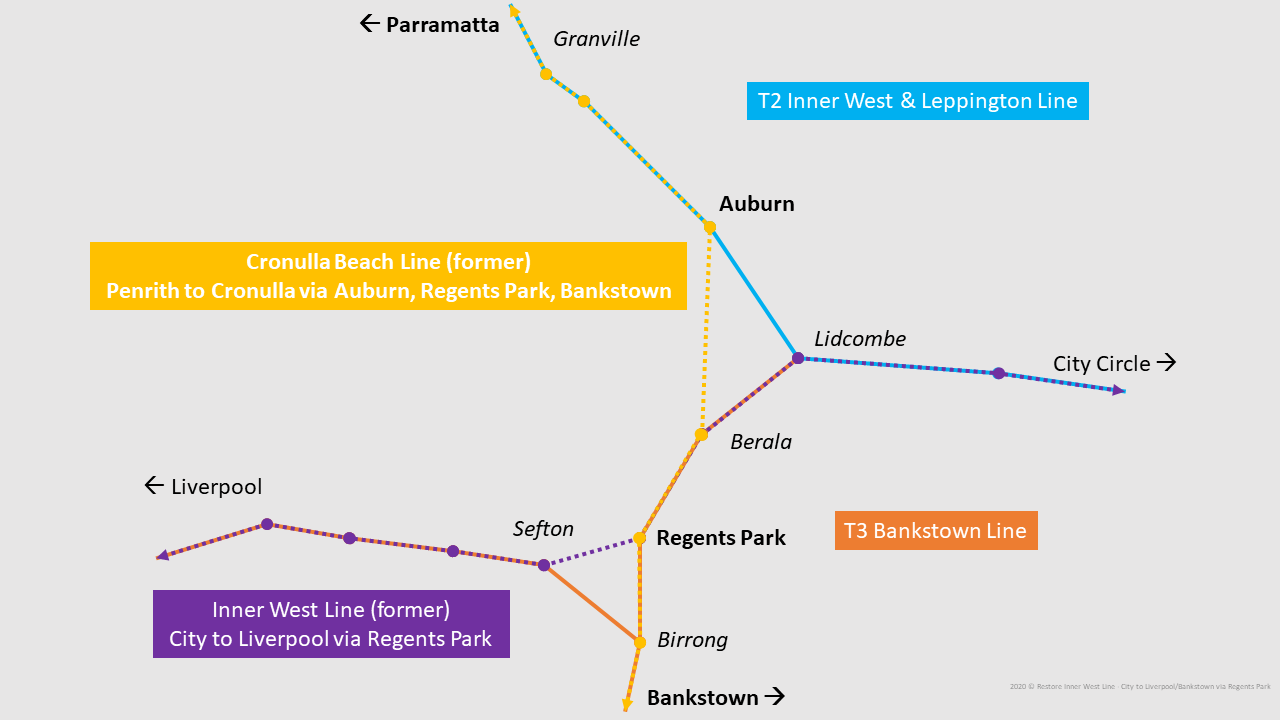 Community Survey: Should there be a direct train from Parramatta to Bankstown (using the track between Auburn and Berala)? Let us know your comments!

During the 1980s, Western Sydney beach-goers benefited from a direct train to Cronulla which made use of the track between Auburn and Berala to the west of Lidcombe station.

Such service operated on Sundays from October to April, with a journey time of around 1 hour and 33 minutes from Penrith.

Western Sydney beach-goers no longer have the Cronulla Beach Line train as timetables have changed since the 1980s along with major infrastructure changes at Sydenham.

The last passenger services between Blacktown and Sydenham (westbound in the morning and eastbound in the evening peaks) was cancelled in the 2006 timetable changes.

However, the direct track between Auburn and Berala remains fully operational, and is used occasionally during trackwork on other lines.

With Parramatta set to become Sydney’s second CBD to be supported nearby centres such as Bankstown, there is real potential to improve connections between these localities.

Both Parramatta and Canterbury-Bankstown Councils have recognised the importance of improving tranksport links between the respective areas in their Local Strategic Planning Statements.

A number of local residents in the Cumberland Council LGA have also raised the possibility of using the track between Auburn and Berala to improve public transport connections.

A direct train from Parramatta to Bankstown would also reduce overcrowding at Lidcombe station, by decreasing the number of passengers interchanging for T3 Bankstown Line services.

Parramatta to Bankstown is currently a journey varying from 25 to 47 minutes with an interchange required at Lidcombe.

Using the track between Auburn and Berala, the journey can be completed in 21 minutes without requiring passengers to interchange at Lidcombe.

The track would be bi-directional with trains to Parramatta in the morning peak and trains to Bankstown in the evening peak.

We would love to hear from you, please let us know your thoughts and comments about a direct train from Parramatta to the Bankstown Line using the track between Auburn and Berala.

Please email us at info@restoreinnerwestline.org.au with your feedback.

With regard to the future Parrmatta to Kogarah via Bankstown line, we are not opposed to new rail or development however we believe that the using existing infrastructure (this direct track from Bankstown to Parramatta via Berala/Auburn should first be undertaken. Upgrading signalling on the Sydney Trains Network is cheaper and more cost effective than building new Metro lines and would add even more capacity for the Bankstown to Parramatta direct train.