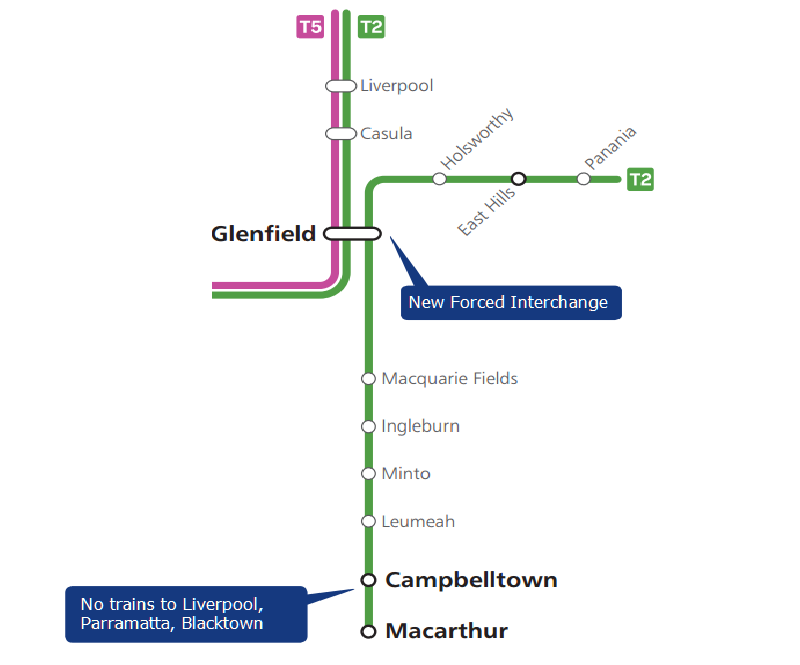 Read More: Liverpool to City is 14 minutes slower than in 1992

Gladys Berejiklian has once again ignored commuters of south west Sydney by announcing more cuts to trains on the T2 Inner West/South Line and refusal to reinstate Liverpool via Regents Park services.

Transport for NSW has confirmed to Restore Inner West Line that Liverpool is the 3rd and Parramatta is the 5th most popular destination for commuters boarding at Campbelltown.

Commuters on the T2 South Line between Macarathur and Glenfield will also have less train all stops services and will have to interchange at Glenfield to continue their journey to the western suburbs.

Journey times from Leumeah, Minto, Ingleburn and Macquarie Fields to Sydney City’s CBD will also increase as a result of Transport for NSW’s so called “More Trains, More Services” program.

Admitting that the changes will disadvantage commuters, Mr Constance told Fairfax Media that “you can’t be all things to all people on a rail network”.

Leppington and Edmonson Park will join the T5 Cumberland Line at the expense of Campbelltown, Leumeah, Minto, Ingleburn and Macquarie Fields which the line currently services.

The Premier has not responded to an invitation to visit south west Sydney stations such as Regents Park and Chester Hill to experience the struggles of everyday commuters on the former Inner West Line.

If the government was serious about improving public transport for south west Sydney, the “Inner West Line” would be restored to its original Campbelltown via Liverpool Line (Campbelltown – Liverpool – Regents Park – City) route.

This article was updated on 22 March 2017 with information about Campbelltown based commuters’ train destinations.