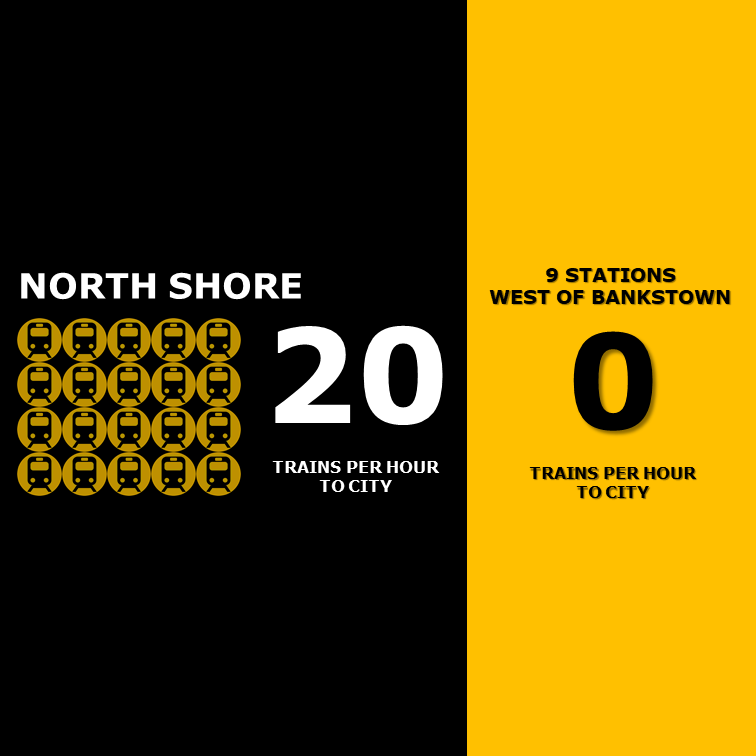 The North Shore will receive 20 trains an hour as part of the current upgrade between Hornsby and North Sydney. Signalling works are underway at stations such as Chatswood, Waitara and Waverton in order for trains to run every 3 minutes to the City on the North Shore Line.

In Western and South Western Sydney, most commuters still are unaware that 9 stations beyond Bankstown (to Lidcombe and Cabramatta) will soon lose all trains to the City. The Sydney Metro Southwest (Sydenham to Bankstown) not only cuts the Bankstown Line in half but also forces 19,000 commuters to interchange.

The government likes to highlight that the Sydenham to Bankstown Metro will allow up to 15 trains per hour at 4 minute intervals. The conversion of the Bankstown Line to Metro requires extensive shutdowns and disruptions resulting in replacement bus services even for stations west of Bankstown.

The key focus of Sydney Metro has always been for development of high-rise instead of being a public transport solution. Upgrading the existing heavy rail signalling for the Bankstown Line is a much cheaper, less disruptive and more effective alternative than the conversion to Metro.

Travel times from stations west of Bankstown (Berala, Regents Park, Chester Hill, Sefton, Leightonfield, Villawood, Carramar, Birrong, Yagoona) to the City via the Bankstown Metro interchange will be on average an additional 2 minutes (peak) and 6 minutes (off-peak) compared to the current direct train on the heavy rail line.

As demonstrated on the North Shore Line, signalling upgrades have the ability to allow for more trains per hour on heavy rail compared to Sydney Metro. Premier Gladys Berejiklian from her comfortable electorate of Willoughby on the North Shore needs to stop neglecting Western Sydney and focus on public transport not high-rise development.

Please support our crowdfunding campaign to expose the government cover-up over cuts to Bankstown Line trains!

Premier Gladys Berejiklian, Transport Minister Andrew Constance as well as Transport for NSW have failed to consult or inform the community west of Bankstown of the significant downgrade to public transport and are also withholding 185 important documents that contain information about the train cuts.

We need your help to fight back against this government’s cover-up and abuse of GIPA (Freedom of Information) legislation to hinder the community from finding out about transport changes in the local area.

We are a community campaign fighting for public transport. Money raised will be used to fund our GIPA (Freedom of Information) request lodged to Transport for NSW, cover processing charges set by GoFundMe (7.25% + 30c per donation) and to assist with the cost of informing the local community about the transport changes.

Supporters of this fundraising campaign will receive priority access to information obtained. Thank you for your support. Any donation big or small is appreciated.